As a young boy, I grew up in a strict household where I was always put down. I wasn’t allowed to speak my mind or stand up to my parents, whether I was right or wrong. I was always getting into some sort of trouble and getting grounded. I never learned to cope with my problems or handle situations that arose in life. As a result, I became an angry, frustrated young man who couldn’t express himself or confront his problems. As a young teenager I found marijuana and alcohol. This opened up a whole new world to me where I could escape the anger, frustrations, and insecurities I had in my life. I found when I was drunk or high, I was outgoing, happy, careless, and unafraid to voice my feelings or opinions. By the age of sixteen, I gave up marijuana and used alcohol exclusively, until I tried cocaine in my early twenties. I never felt like a whole person before I used drugs and alcohol and I was fooling myself into thinking I was when I would use.

I met and married my first wife right around the time I found cocaine. During the next 17 years of marriage, my sobriety depended on how my marriage was doing. My not being able to cope or handle my problems was having a negative effect not just on my marriage, but also my life in general. Clearly something was wrong and something needed to be done about my addictions.

In 1989 I had enough of the ups and downs of addiction and went to an outpatient rehab program for eight weeks. There, I learned just enough to live sober, however, I didn’t learn all I needed to stay sober for more than five years. I hadn’t learned to be strong enough to cope with or handle the hardships that life throws at us. I lacked the tools and life skills to get to the root of my problems and deal with them head on without drugs or alcohol. What I did discover in those five years sober was that I liked life and myself sober, however, my struggle wasn’t over yet.

When my marriage ended I sunk deeper into alcohol until I met and married my second wife. I remarried mainly sober with occasional relapses. When my second marriage ended, I went right back to alcohol. For the next two years, I drank daily, feeling sorry for myself and hiding from the world until I met and married my third wife. When my wife made it clear she wasn’t comfortable with my drinking, I used alcohol occasionally, struggling to keep it under control. After a year and a half of marriage, my third wife and I separated for 8 months. Once again, I sunk back into daily alcohol abuse. We got back together after eight months and my drinking was minimal.

In 2013, I hurt my back and began to use prescription pain medication, adding another addiction to my life. In November 2016, I confessed to my wife that I had an addiction to pain medication and she asked me to leave and filed for divorce; once again feeling weak, hurt, and alone. I dove deeper into drug and alcohol use. Finally in February 2017, my addiction caught up with me when I had a car accident while driving drunk. I got arrested for a DUI and spent the night in jail. One week later, I reached out to my son and his wife, and they brought me to Narconon Suncoast.

Here I went through the sauna program, getting the drugs and alcohol out of my system. With a clear mind and body I was now ready for the Objectives part of the program. This was an entirely new and different experience for me. There I began to look at myself and my existence in this world in an entirely different way. I learned a lot about myself, my abilities, and my short comings. I finished Objectives a better person, ready for the next step, Life Skills. There, I looked at the people in my life, I looked at the actions I’ve taken, and the effect they had on myself and all else in this universe. I also came to realize that although I always justified my addictions as though I was wronged by someone else, I could clearly see for the first time in my life that I was the one responsible for my problems.

I feel like an entirely new and different person. I now feel I have an inner strength and calmness I have never felt before. I feel I can go back into the world as a whole person, not the half person I felt I was since childhood. I look forward to making better choices about my life and my future, such as who’s in it and how I deal with the situations that arise in daily life. I feel I can achieve success in anything I choose to work at. I truly feel blessed to be a part of this program at Narconon Suncoast.

When I first got to Narconon on November 2nd I was not only intoxicated, but I was a ghostly silhouette of myself. I had a mullet style haircut that was gross and nasty, my skin was pale white, almost transparent, and I only weighed 150 lbs. I was told I looked like a messed-up version of Forrest Gump. 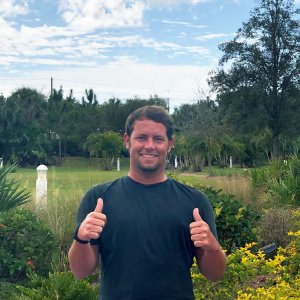 I Found Empowerment to Change at Narconon Suncoast

Drug use, at the end, progressed at a dizzying speed for me. Even though I was the one taking the drugs . I saw myself as the victim of m y wife, my job, and the doctors that were trying to help me. I even felt like a victim of my own family.