Last week, a Japanese man died on board a flight from Mexico to Japan after crew members noticed the man convulsing and in distress. After making an emergency landing in Sonora, Mexico, paramedics came on board the airplane where they found the man dead. An autopsy was conducted, and it was found that the man died as a result of a cocaine overdose, causing a condition called “cerebral edema.”

After further examination of the man’s body, 246 small plastic bundles each about 2.5 centimeters long, were found in his stomach and intestines. Obviously, some of these packets opened up after they were swallowed, causing the man’s death.

Unfortunately, stories like this aren’t new. For many years, drug smugglers have concocted many ways to get large quantities of drugs from point A to point B without being detected. The people doing the actual smuggling are called “mules” and it’s not uncommon for them to put drugs in secret compartments in cars, strapping large bags to their bodies, or stuffing them into body orifices. The most dangerous method is smuggling them internally via swallowing. If the packages are not carefully wrapped, they can come undone once they start passing through the digestive tract and unleash an insane dose of drugs that most often will lead to death. When you get that large of a hit, there’s really nothing that can save you.

Had these packages the Japanese man swallowed not unraveled in his gut and killed him, those drugs more than likely would have made it to Tokyo and been available for sale. The only reason this hit the news is because the guy died smuggling innumerable pellets of cocaine inside his body. The scary thing is that there’s many other people doing the same thing—they’re just not getting caught. Once they arrive at their destination, the packages are passed into the toilet, cleaned off or not, then brought to the dealer to be broken down into individual baggies for sale.

It’s sad that this man put his life at risk to make some quick money but, as I’ve said over and over again, this whole drug crisis is the result of greed and the want for the almighty dollar. It’s surprising to see how low people’s ethics and moral standards will go to get a quick payday. As with cures for drug addiction, “quick fixes” and “magic bullets” are the same as making fast money. If it sounds too good to be true, it probably is. If we just stopped for a minute and took a breath, looked around, and saw the carnage caused by drugs and greed in our society, maybe one person would come to the realization that things need to change before they get worse. If you think it’s bad out there now, you don’t want to imagine what the scene will be like in another ten years if we keep going at this rate.

Drug Addiction and Our “Quick-Fix” Society

Let’s look at the current drug and alcohol addiction epidemic from a different angle: America has become the land of the “quick-fix. 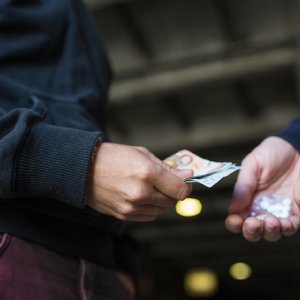